Search for your favorite games…

Stop the presses! Gamestop has gotten into the publishing business, old news?

Yes, buuuut they seem to be doing it right. When my fellow EPGer Nicholas wrote about the reveal of Gamestops next venture in April, I didn’t pay attention, I just moved on as if the word Gamestop was omitted from the brain, just like it is for many gamers who have been betrayed by them for the last few years, decades even. But they seem to be so far at least doing an amazing job at publishing and marketing their first game with Insomniac, the devs behind Resistance Fall of Man and  Sunset Overdrive. And for once it looks like fifteen dollar games/indie games will be getting the Triple A treatment.

Yes, we have seen Limited Run and a few others release physical copies already,

but the way Gamestop is doing it, to see a large company as them do this and release as much support such as merchandising and a collectors edition for a game that many would not think to pick up and most likely skip over for a AAA titles collectors edition is amazing. But they are not only bringing out a collectors edition, they are pricing it better and fairly compared to the competitors AAA CE, because for $30 you not only get yourself the game, you also get a steelbook, digital soundtrack, book and stickers. That is a lot of love for such a small price tag, especially for a game that would most likely be in the arcade section of the xbox 360 back in the day and forgotten about until the Summer Sale came knocking.

My Funko Pop I picked up, support if you see something being done right!

But the CE is not the thing that has me hyped for this Gamestop en-devour,

it’s the merch, the Funko Pop, the statue, the watches, deck of cards, keychain and artbook they are releasing for it. Yes they might be going full sellout mode, but they are doing it for a $15 game! I would of loved this for Shadow Complex, Punch Club, Super Meat Boy, Binding Of Isaac, Jamestown, Wizorb, Awesomenauts, Deathspank, It just makes me feel giddy inside that we might be seeing a lot more love for indies and smaller games from companies such as Gamestop, but the big question remains, will Gamestop stray from the vision? I hope not, I will support this and give them my money as long as they keep doing what they are doing right now. Because not even EA gave this much love to their games when they published Double Fines Brutal Legend, Epic Games BulletStorm, SHADOWS OF THE DAMNED, Alice Returns etc. etc. They even cancelled the Skate franchise, like come on. 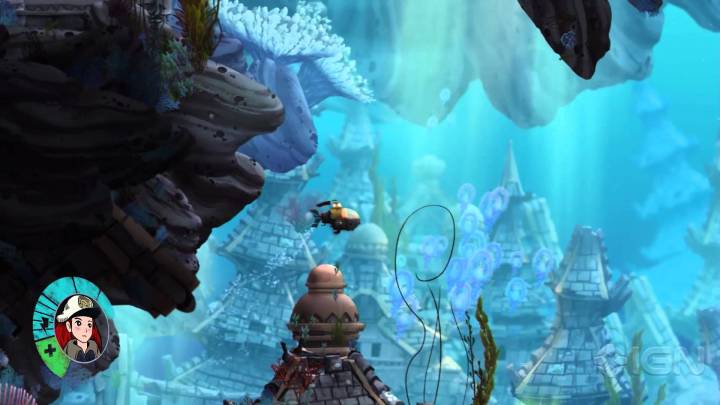 Gameplay of Song of The Deep

Also. depending how you look at it, yes, Insomniac isn’t an indie dev to many,

but to me for this game they some what are, because you have to keep in mind, that the only way Insomniac has been able to make all these triple A titles have been with the help of Microsoft and Sony, so no, i never rule out a game from being indie if it’s created by a studio that has made AAA titles before.

Let me know if you are hyped about Gametrust’s / Gamestop’s current start into the video game publishing world.